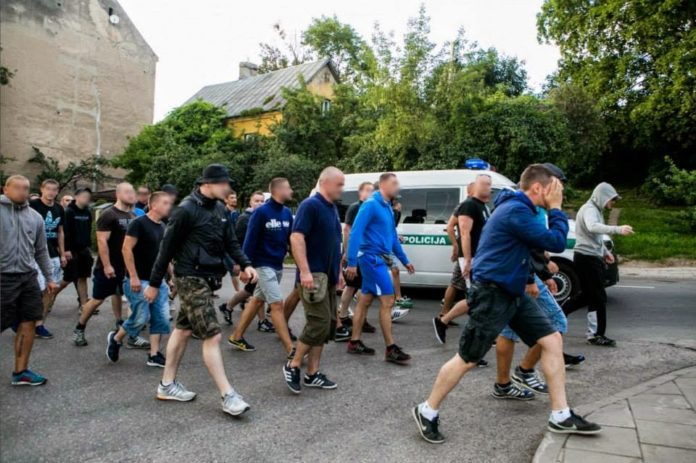 The first organized group of blue fans appeared in 1986.throughout Dinamo have been followed by the “army” of supporters throughout their history. A few most faithful and most eager Dinamo fans established the group “Bad Blue Boys” after the model of similar fan groups from abroad. According to the legend, this name was incited by the film “Bad Blue Boys” with Sean Penn in the main role. 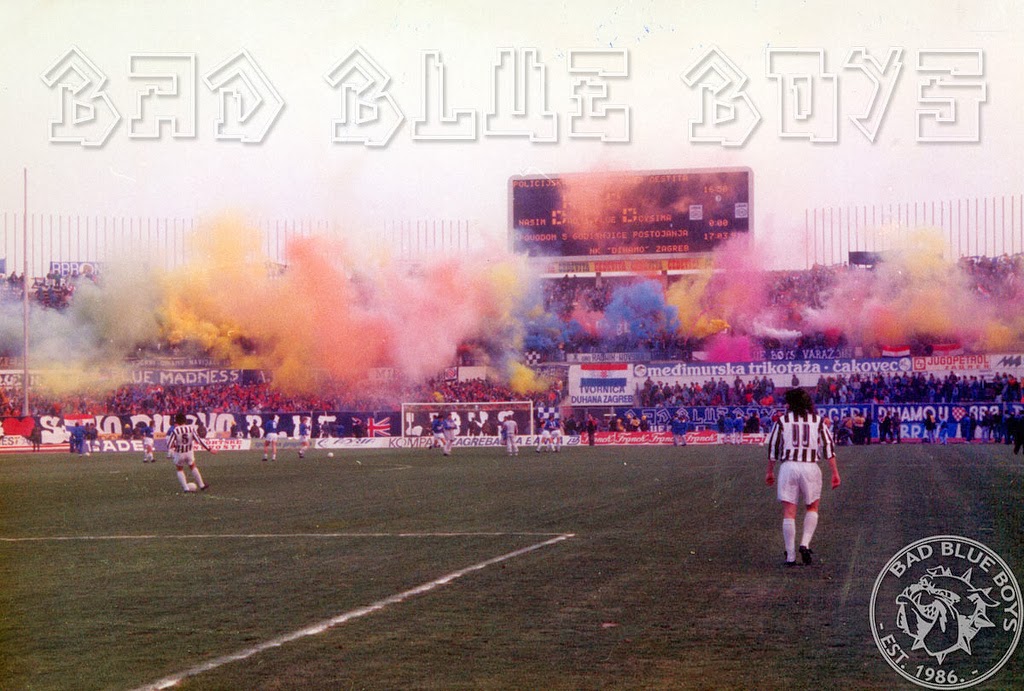 The BBB branches started appearing in all parts of Zagreb so different banners were seen at the stadium (BBB Maximir, BBB Travno, BBB Dugave etc.). At the beginning, the fans organized departures to visiting matches themselves. They were remembered in Belgrade, Sarajevo, Ljubljana, Niš, Titograd, Split…They proudly traveled throughout the former country, with their heads up, and with the names of Dinamo, Zagreb and Croatia on their lips. Very often it was unavoidable to get into fighting in order to support and show loyalty to the club. They didn’t bother.

Dinamo was and is their sacred thing. At the beginning of 90-ies, the first fan club “Bad Blue Boys” was founded. It had aroused a great interest, everybody wanted to give his contribution, but in spite of all that enthusiasm, the fans faced numerous problems. Regardless to all the troubles the bonds among the fans were getting stronger and reached its peak on 13 May 1990.

That was the day when Maximir stadium hosted Crvena Zvezda from Belgrade. The visiting fans, so called “Delije” had started provoking before the match started. When Belgrade hooligans broke the fence at southern standing and started the fight with a group of Dinamo’s fans, the northern stand with Bad Blue Boys went mad. The security fence was demolished in a second and BBB set in motion towards south. The police forces blindly followed the commands of their superiors and fought fiercely against BBB. Many were arrested, beaten up and “marked”.

Zvone Boban, the captain of Dinamo tried to defend Dinamo’s fans. His legendary jump on to the policeman marked the beginning of the fall of one state. The majority of BBB, thinks that the war in Croatia started on 13 May 1990 – by the match between Dinamo and Crvena Zvezda that had never been played. During the war, a lot of Dinamo’s fans were also the soldiers of Croatian army in the war where they were defending their home land. They were either in police forces, ZNG or HOS, and together with the fans of other Croatian clubs they fought on the battle fields from Prevlaka to Vukovar. Many of them had never returned home. The monument –shrine to the Croatia Knights – was built in honor and glory to all those who died with blue color in their hearts, below the west stand of Maximir. Generations of BBB have passed through Maximir stands but they remained the twelfth player of Dinamo. They have become the unavoidable part of “the Dinamo legend”. 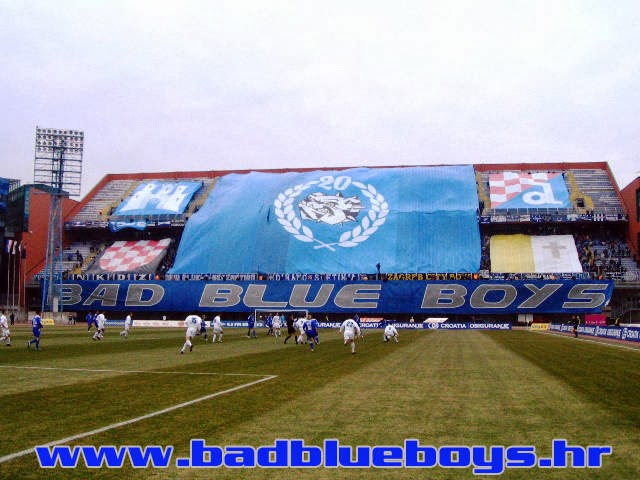 Zagreb journalist Andrej Krickovič argued that Bad Blue Boys were at the forefront of the national movement in the country in 1990 and that they had offered their support to Franjo Tuđman (who became the first president of Croatia in the 1990s) in Croatia's first elections. And Sasa Podgorelec, a Zagreb film director who made a documentary about the Bad Blue Boys stated that they were, ” conscious enough of their own identity and brave enough to express their wishes for Croatian independence… when others were too frightened to say so. Later on, BBB turned against Franjo Tuđman who pushed for club's name to be changed to NK “Croatia”. Tuđman was a frequent visitor of home games and would usually be greeted by stadium officials before the match started. This would always trigger loud whistling and chanting from Bad Blue Boys often forcing Live TV coverage to mute the audio.

In 2008 the group were involved in a controversy over graffiti daubed on the walls of the Zagrebački električni tramvaj building at Remiza, saying, “Death to Journalists, BBB ZG”, which appeared on 21 March 2008. The graffiti appeared following the death of a BBB member after a brawl in in Ribnjak park. BBB denied any involvement in either the graffiti or other incidents which had occurred, criticising reporters for “agitation and prejudgement” for stating that Dinamo fans were behind the entire matter. Zagreb's mayor Milan Bandić also offered his support to the Bad Blue Boys, claiming that they were wrongly accused and that the entire story was false. In November 2008 BBB fans were praised by the English media for their support at White Hart Lane in London at a UEFA Cup match against Tottenham Hotspur for continuing to loudly support their team, even when they were losing 4-0. 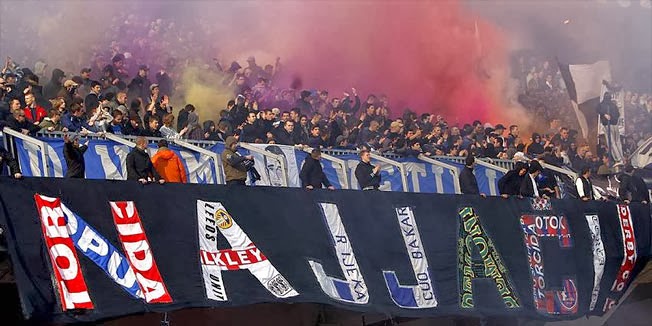 In December 2010 30-40 Bad Blue Boys attacked an PAOK traveling coach with stones, bricks and flares setting the traveling coach on fire and inflicting injuries on several passengers.
From 11 August 2010 the Bad Blue Boys were boycotting the clubs matches due to their dissent with the clubs leadership. The boycott ended on 30 August 2011, but remained active for the European matches in the Champions League that season.
In 2011, Bad Blue Boys made the list of 16 “hardcore hooligan firms, ultras groups we wouldn't want to mess with”, compiled by the American sports website Bleacher Report. 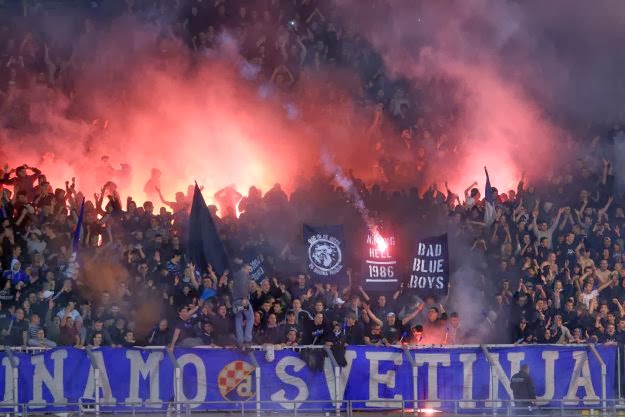 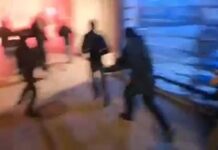 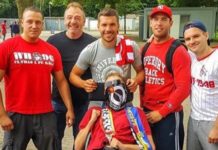 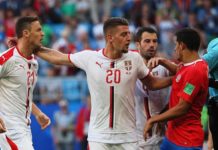 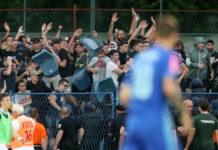 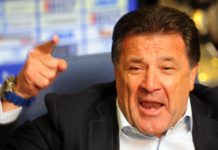