The long tradition of clubs and modest results were founded by the anarchists in the city of Buenos Aires, dominated by the largest cemetery in Argentina, with fans called the “graveyards” that are considered one of the most extreme fan groups. This is a story about the club Chakarita juniors.
When it comes to Argentine club football, the most common associations are River, Boka, San Lorenzo and similar giants. The name of Chakarita, which sounds more like a female character from a South American telenovela, is not attracting attention. True, the club stationed in the same settlement did not record any success, won one title, it is only a casual participant of the elite competition, and the stadium is located in the suburbs of the Argentine capital. Nevertheless, Chakarita has a long tradition, while fans are valid for one of the most ardent and most dangerous in Argentina. Buenos Aires, with its 13 million inhabitants, is known to be one of the world's largest metropolises. According to the number of football clubs in all leagues, the Argentine capital has the most dynamic soccer offer on the planet. In addition to football giants, Boca Juniors, River Plate, San Lorenzo, Velez Sarsfield and others, there are a number of smaller clubs that complement the city's football mosaic. Wait is one of them.

Sports successes could be put in a single sentence. The club won the only title in 1969, finishing the competition in Matropolitan (name of the competition) in the first place in front of River Plate and Boca Juniors. That year, two competitions were held, such as Aperture and Clausura today, sometimes the competition was called Metropolitan and National.
That year, Chakarita ended up in her group in second place, behind Boka. In the semifinals, on the match against Rasing, Chakarita won 1: 0, while in the final against River Plate triumphed with 4: 1. In the second competition of the same year, Nasional, Chakarita took only seventh position.
Before and after this success, the fans of the Chakarita celebrated or mourned when the club crossed from the first to the third league. Last time, Chakarita entered the first league in the 2008/09 season. when she returned to the other league after five seasons.
However, what distinguishes Chakarita from many Argentinian clubs is the very way of its origin. Chakarita was founded on May 1, 1906, at a time when football clubs were founded under the influence of the English, who had their companies in the countries of South America.
At a time when large national companies of foreign countries were ruling in these countries, an extreme wing of the Socialist Party, close to the ideas of anarchism, founded Chakarita. Leftists at that time considered religion and football opium for the people and often criticized them. However, they realized that football can serve as a means to fight for goals. Some soccer soccer theorists have even recognized the possibility of socialist ideas being implemented in reality.
As directed, in the field you had 11 players working together on the same goal, purely applied socialism. Thus, Chakarita became one of the first clubs whose beginnings had socialist, more precisely anarchist roots. Even colors are jerseys, which are still basic, red and black, colors that symbolically represent the anarcho-syndicalist movement, while one of the stripes is white.
Each of the colors has its own explanation. Red marked the socialist roots of the club, the black cemetery that dominated the village, and the white purity of the socialist founders of the club. The only name of Chakarita is the part of Buenos Aires where the club was founded (the club was built on the border of the Chakarita and Vilja Krespo settlements). In Argentina, “chapels” were small church estates, farms that were located in that part of the city. The deminutive word of the chakra is “chakarita”, which is taken for the name of the club. The club has its nicknames Čaka and Ča, which were created by shortening the name. Chakarita is now known for being the largest cemetery in Buenos Aires in this part of the city.
The Cakarita cemetery is located in the village and with its 95 hectares of land is the largest in Argentina. Only the graveyard occupies more than half of the settlement, and it was founded at the end of the 19th century in a place where mass graves were found containing bodies of people who died in the yellow fever epidemic.
The fact that the cemetery was dominated by the settlement where the football club was founded, and Chakarite fans from others were nicknamed Los Funebreros (graveyards). With this nickname, Chakarita fans were afraid and Buenos Aires trembling. The fans themselves gave the name La Famosa Banda de San Martín, suburb of San Martin in the district of Maia, in which the Chacarita Stadium is located. The stadium currently receives just over 13,000 spectators, but when it is fully refurbished it will have a capacity of about 35,000 seats.
One of the legends of the club is goalkeeper Isak Lopez, who spent 15 years in Chakarita (1937 to 1952) and for which he played 343 matches. One of the stadium stands was named after the legendary guard of the club's network.
The location of the stadium and the seat of the club were largely determined by the largest rivals of Chakarita. The seat of Chakarite is located in the settlement of Vilja Krespo, where he was also first stadium. Atletico Atlanta is also located in the same settlement. Since 1922, two clubs have become big rivals. The rivalry did not stop even when the club started playing at the new stadium in the suburb of General San Martín Partido in the northwestern suburb of Buenos Aires, because the seat of the club remained at the same location. In the derby matches, Chakarita is much more successful than Atlanta. Since 1927, when the first game was played, a total of 126 matches were played. Chakarita scored 54 wins, Atlanta triumphed 34 times, while 38 games ended with an unresolved result. Although the Chacarita Stadium is now in the suburbs of Buenos Aires, the rivalry of two clubs is still enormous, as well as the hatred among fans, whose base has remained at the ends where the club was driven. Chakarite fans are stationed at the ends of Chakarita and Vilja Krespo all the way north to the suburb of San Martin where the stadium is located. Although not valid for the dangerous part of the city, a few years ago the inhabitants of Chakarita attacked a police station after the police killed a teenager in that area. Although, apart from winning one title, Chakarita did not have much success, the club became known throughout Argentina (and even the whole world) by very extreme fans. It has already been said that Chikaritina bar-lock (organized group of fans) is called La Banda de San Martín. The group was proven back in 1986 at the World Cup in Mexico, when the shoulder with the hooligans of other Argentine clubs participated in the beatings of the Englishman. Two years earlier, Chakarita turned out to be in the other league because of the hooligans, because the club was punished for raising fans with a one-month suspension and subtracting ten points. Since the mid-1980s and the reputation of Chakaritina Bar-lock has begun to grow, so fans of that club have become famous throughout Bunos Aires. Chuck's hooligans are valid for one of the most extreme in Argentina and are one of the few who have not been allowed to enter into conflict with the fans of Boka and Rivera. Also, Chakarita's fans do not hesitate to attack the police, which makes them perhaps the most extreme fan group at the moment in Argentina. Unlike other large groups in which there are fractions that are in mutual warfare, Chakarite fans have a smaller but more compact extreme core of fans. The squabbling incidents of the waiters have been marked in the past few years, attracting the attention of the media, more than the results of the club. Former club president Luis Barionevo admitted in 1999 that he was giving money, free tickets, and pay for the most extreme supporters in order to calm them down. This was not a lonely case, having in mind that the administrations of many clubs cooperate with their extreme fan groups. Apart from Atlanta, as the local rival to the fans of Chakarita, the biggest rivals are the hooligans of Boka Juniors. The big clash between the two groups broke out in 1999 when supporters of the Boka, angry with scandalous scandals, flew into a part of the stadium where Chakarite fans were at the platform where the most extreme supporters were stationed, but above all parents with children. Four years later, in a new fight, the hooligans of the Chakraite retaliated. In rioting, as many as 60 people were injured, while nobody was arrested. Public pressure resulted in the first arrests following the incident only in 2007, when Rafael di Zeo, one of the legendary leaders of Boca's fans, was a very popular figure in Argentina. Di Zeo was arrested with several more sighted hooligans of Boka and all were given years-long slaves. From that moment, the relations of the fans of the two clubs are even more severe. One of the biggest incidents lately broke out in 2012 against a traditional rival – Atlanta. After the match ended with a score of 1: 1, the furious fans of the Chakarite attempted to attack the supporters of the visiting team. Rapid clashes broke out of the stadium where the police only managed to regain the situation under control two hours later. Police had to use rubber bullets, while fans fired two police vehicles. The chefs are one of the few who had anti-Semitic scandals, which is exactly against rivals Atlanta. The roots of this club are related to the Jewish emigration that has settled sections of Buenos Aires – where the club originated. Apparently Chakarite fans scandalized in one game: “He waits down the street, kills the Jews and makes soap.” The club denied scandals, but Chakariti eventually took points. Just because of the Chakarita hooligans, new disciplinary rules have been introduced. This happened after the match against Atlanta in 2000 when the supporters of the Chakarita had a developed Nazi flag with a message: “We make a soap from the Jews.” The Argentine Football League then made the rules that, in the case of anti-semitic messages or calls, the game immediately terminated. Despite the scary reputation, Chakarite fans also have friends. They are in good relations with fans of Lanus, Rosario Central, Belgrano, Argentinos Juniors, Union Santa Fe and Lima from Peru. Of course, the list is dead enemies is much longer. On the wrist, supporters of the Chakarita are with the supporters of Boka, Rivera, San Lorenzo, Colón, Newells, Talianes, Atlanta, Platense, Tigre, Deportivo Morona, Quilmes, Nuevo Chicago, Gimnasia La Plata, Los Angeles, Racing and probably all others another club. At the moment, Chacarita competes in the third Argentine league and it seems that the elite Argentine championship will be for a year without a “graveyard” and “anarchist” from San Martín. 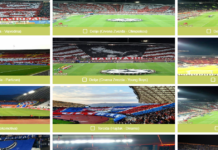 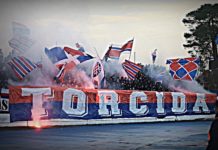