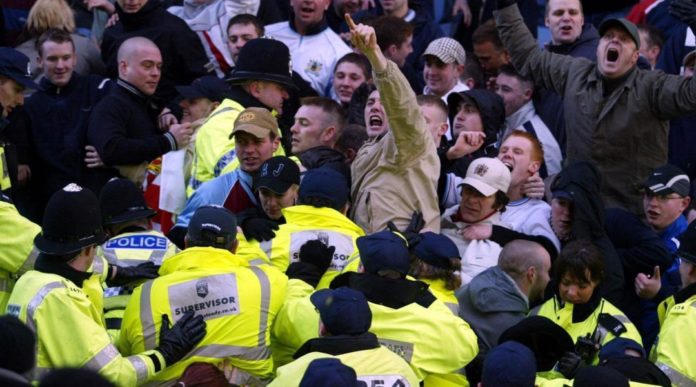 BURNLEY SUICIDE SQUAD
The Suicide Squad is a football hooligan firm linked to the English Premier League team, Burnley F.C. The self-imposed title is derived from previous behavior at away games where the single minded involvement in violence against overwhelming odds could be described as suicidal. The name became synonymous with the group during the early 1980s and many of the original members, now in their forties are well known to the police and have a string of convictions for violence.

Out of the terrace wars of the 1970s emerged a gang known as the Suicide Squad in a period which also saw Burnley’s fall from the old Division One to Division Four and the threat of non-league football. This meant that the calculated, disciplined, organised operation that struck fear into opposing fans clashed with just about every rival mob in the country and became world renowned as one of the fiercest and most dangerous in Britain.

Although partially disbanded a new, more menacing group began to emerge. This group, considerably younger, named themselves the Burnley Youth. They would remain associated with the older hooligan group known as the Suicide Squad, but refused to abide by the rules of the game. This group were more determined and less affected by the police tactics, than their older colleagues. The police began to receive intelligence reports from members of the Suicide Squad who were genuinely concerned that their younger brethren were “out of control” and were travelling to away matches with weapons. The level of violence and the circumstances surrounding these incidents strongly supported these concerns. 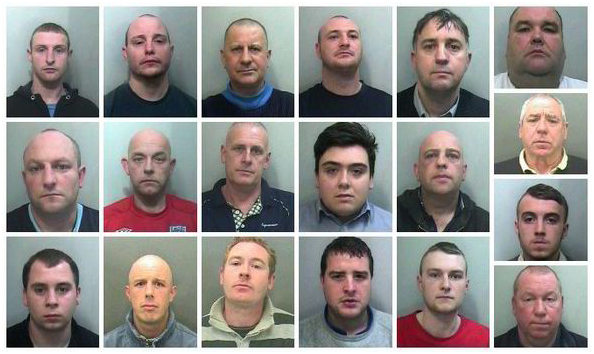 In November 2002, Burnley police and the football club jointly established Operation Fixture, a scheme aimed at tackling football hooliganism in and around the club’s stadium, Turf Moor with more bans, more arrests and quicker convictions. The scheme also aimed to target racists, with the example of a Burnley fan having given a Nazi salute during a Worthington Cup match against Tottenham Hotspur F.C.

On 7 December 2002, a 17 year old Nottingham Forest F.C. fan was killed when Burnley fans attacked Nottingham Forest fans in Burnley town centre. Two days later, a 19 year old Burnley fan, Andrew McNee, a member of the so called Suicide Youth Squad was arrested and charged with murder. In July 2003, McNee was sentenced to seven years in youth custody after he pleaded guilty to manslaughter. He was also banned from football matches for ten years. When passing sentence, the trial judge commented that the attack had happened, “for absolutely no reason, other than he supported a different football team and had the temerity to visit a public house the defendant and others believed he should have kept away from”; adding that football hooliganism was a “scourge on the sport” and said the courts should make it clear that anyone involved in violence would face harsh sentences. McNee was released from prison in 2006. Within weeks however, he was fined £200 after pleading guilty to breaching his ten year football banning order. On 22 July 2006 police caught him outside Turf Moor when Burnley were playing Bolton Wanderers F.C. Burnley’s first home game since McNee had been released from prison.

In July 2007, one of the founding members of the Suicide Squad, Andrew Porter, who wrote a book about his exploits with the firm was coming to the end of a three year ban from attending bothEngland and domestic matches. However, Burnley police applied for a fresh banning order with the start of the new season only weeks away under Operation Fixture which had been introduced in 2002.
In May 2009, another founder member of the Suicide Squad, Philip Holmes, was banned for a further three years from English & Welsh football grounds. The ban follows a steady stream of incidents since Holmes’ original ban expired in February 2007, including being the central figure in games against Stoke City & Sheffield United in the 2008-9 season.

The Suicide Squad featured in the television documentary series The Real Football Factories which was first shown on the Bravo Television channel. 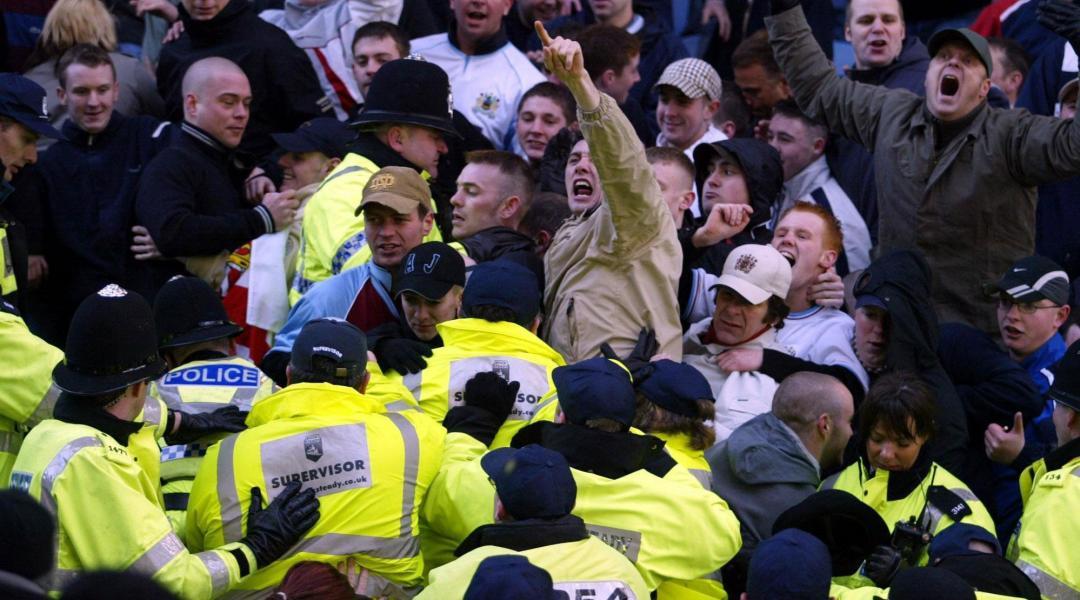 When Burnley met their main rivals Blackburn rovers on April 4th 1983 they lost a Second Division game at Ewood Park , manager Frank Casper was forced to appeal for calm among the travelling supporters following unrest that had resulted Burnley fans climbing up onto the roof smashing up anything they could get their hands on including asbestos tiles being ripped from the roof of the Darwen End and used as missiles. This match was deemed to be ‘The match that died of shame’ or more notably ‘The Day the roof came off’. A quote from Simon Garner shows the hostility at the game that day, “I remember scoring two penalties against Burnley in 1983 and as I was running up to take the second, bricks were being thrown at me on the pitch”. The cotton mill derby or ‘el lancs Classico’ is arguably one of the fiercest derbies in English football. Since the fifth-round cup replay in 2005 and the violent aftermath of the first tie at Turf Moor both sets of supporters have been forced to travel to the rivals ground on buses surrounded by a heavy police escort although this still hasn’t put a stop to the violence as on the 28th march 2010 over 40 people were arrested after violence erupted in the stands with fans battling with police trying to get at the rovers fans sat smugly behind the police protection. The latest meeting between the two sides saw a 12:30 kick off on a sunday morning but this still didn’t seem to matter to some Burnley fans who reportedly bricked rival Blackburn fans coaches when they were entering Burnley.

On 18 October 2009, following the first FA Premier League derby between Blackburn Rovers and Burnley, members of the Suicide Squad clashed at the Station public house in the Cherry Tree area of the town in a riot described by police officers as “like something out of Braveheart”. 15 months later, 12 members of the Suicide Squad received prison sentences totalling 32 years along with lengthy banning orders. Andrew Porter, aged 44, was discovered to have organised the riot, receiving the heaviest sentence; a five-year prison sentence along with a 10-year banning order. Porter had written a book – Suicide Squad: The Inside Story of a Football Firm – about his experiences as a football hooligan. 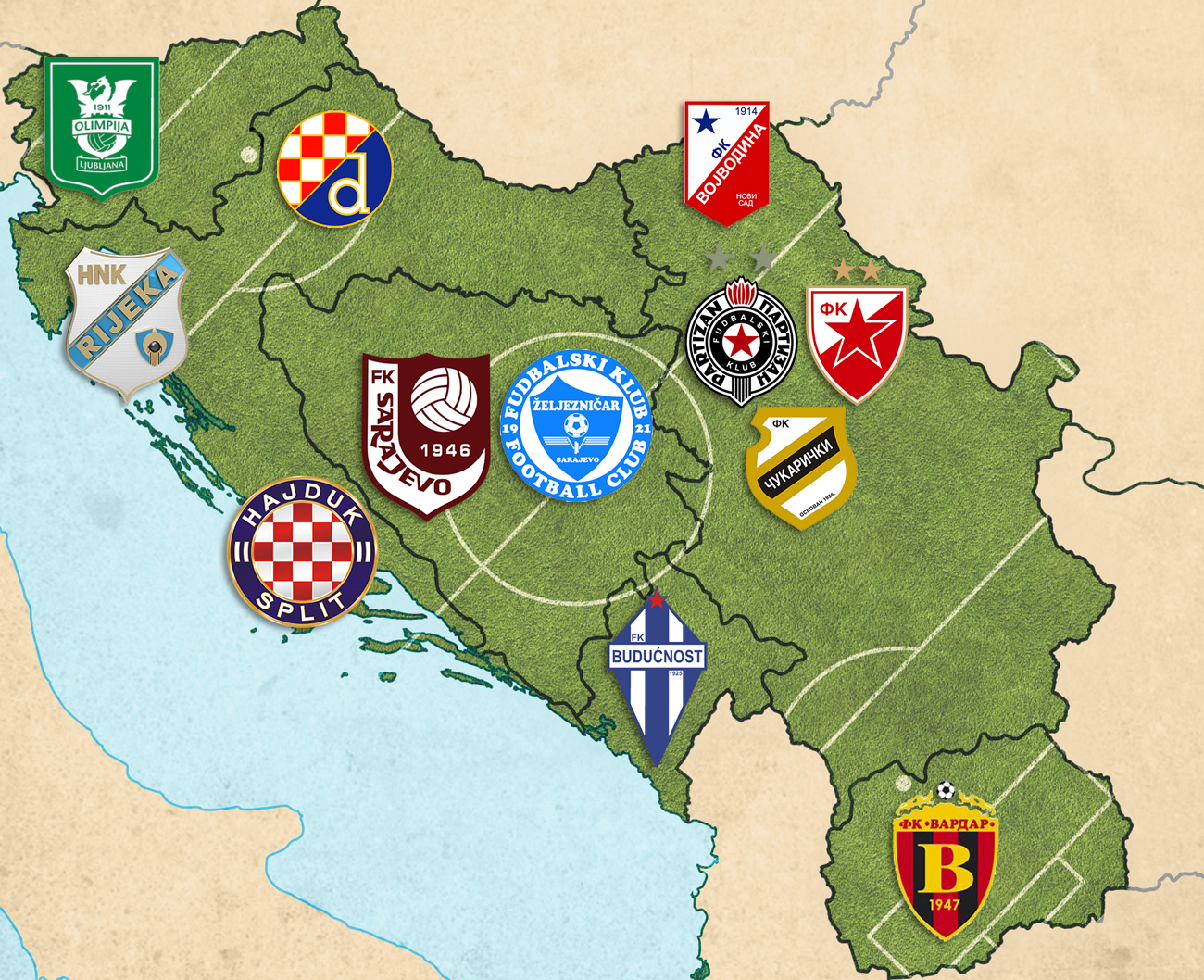 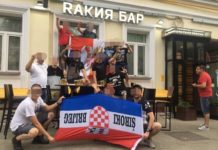 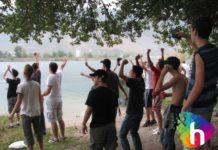